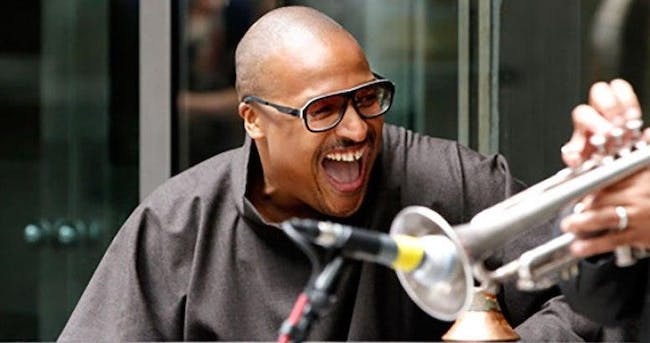 Virtuoso organist, pianist and composer Greg Lewis, is a highly accomplished mainstay on the city's jazz, blues and funk scenes, Greg Lewis represents the next generation of jazz artists. Lewis possesses a deep commitment to discovering his own musical language through specific jazz techniques…”I’m creating music for the next generation of jazz innovators” says Lewis whose style on the Hammond B3 demonstrates he’s mastered the complex multi-manual and foot pedaled contraption. His ability to use the organ’s enormous sonic range to playfully turn traditional jazz melodies and notes into harmonic insights at grooving rhythms; coaxing sounds on the B3 that go well beyond the bluesy basics for swinging soul-jazz established half a century ago by Jimmy Smith. and Larry Young; has earned him a solid reputation for his versatile work around town, in a vast variety of settings.

A product of the hip hop generation, New York native, Lewis was born into a musical family. His introduction to jazz came from hearing his late father, David Lewis' collection of Thelonious Monk records and the unsung master, Elmo Hope were "major influences" Lewis proclaims. Greg Lewis grew up doing the human beat box and started his own piano studies at the age of eleven. By the time he was a teenager, he was playing professionally around New York.

Not long after enrolling in the New School Jazz program, his mentor and teacher, jazz legend Gil Coggins would send him to a gig as a sub one night only to discover that instead of a piano there was a Hammond B-3. It was a defining moment in Lewis’ career that would set him on the path to becoming a bona fide organist. He would go on to study with Jaki Byard and has since toiled in today’s jazz vineyard.

Lewis' sensitive and soulful keyboard playing has also made him a favorite among some of the music's finest vocalists - including blues queen, Sweet Georgia Brown, who was recently inducted into the Blues Hall of Fame. Lewis has also earned him a featured role on saxophonist Sam Newsome's Groove Project recording 24/7. Throughout the years, the spotlight has grown on his enormous talents as the leader of his own all-star trio featuring multi talented guitarist Ron Jackson and drummer extraordinaire Cindy Blackman. Not to mention a role as the "Piano Man" on the first season of the TV series, "Sex and the City".

A regular at hip New York city venues such as 55 Bar and Minton's where he performs with his Quintet, Greg Lewis Organ Monk featuring Jeremy "Bean" Clemons on drums, Tenor saxophonist Reggie Woods, trumpeter Riley Mullins and Ron Jackson on guitar. As masters of their instruments and architect of distinctive style, the members are all virtuosos of rhythm, unexpected shadings and accents; not to mention their use of time, space and silence highlights the Quintet's mission to expand upon the interpretation of jazz and create a catalogue of 21st century American originals. The result is a success, along the lines of the mandate poet Ezra Pound thrust upon all fellow modernists: Make it new!