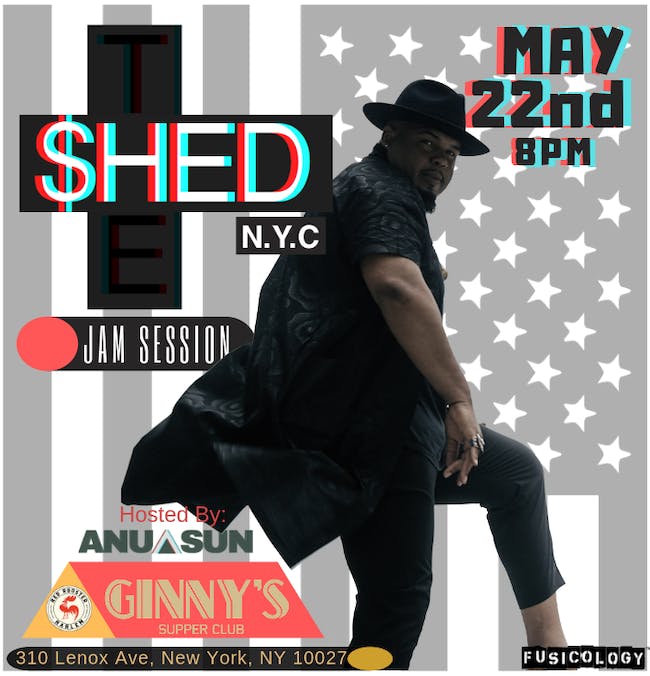 The Shed: Hosted by Anu Sun

Past Performances at The Shed Include:

James Poysner (of The Roots)

Mark Kelley (of The Roots)

R.C. Williams and The Gritz

Producer, songwriter and engineer Anu Sun is affectionately known industry-wide as “Anu The Giant,” but his physical stature only compliments his tremendous place in the music game. Aside from a staple in New York City’s live music scene, his recent credits include work on the Grammy Award winning motion picture soundtrack Miles Ahead and production partner Robert Glasper’s Grammy nominated Black Radio 2. Anu has also worked intimately with jazz and R&B staples like Bilal, Ledisi, Laura Mvula and more, assisting in their meteoric rise. On top of that, the Las Vegas native has credits with legends like Johnny Cashand Miles Davis. Now, however, is the distinct moment that Anu steps out with his first project in 8 years, a move that is certain to place him with his peers as a more prominent, provocative renaissance musician.

Anu is set to release Sanguine Regum his upcoming, genre-merging album that seamlessly melds Hip-Hop, Rock, R&B and Jazz into a single composition. Anu says - after supporting so many for so long - this is his moment. “Its progressive adult contemporary - the maturation of Hip-Hop and jazz. “If we are making honest Hip-Hop for our generation, then I think this is where we should be,” he says. “It’s like the Jazz samples used classic 90’s but with real musicians actually playing.” The album, which has taken 3 years to craft, occupies a unique space in today’s landscape.

A resident of Harlem, Anu’s vast talents were groomed in a family flush with music, culture and fashion. And the roots run deep, as his godfather is legendary Jazz vibraphonist/drummer Lionel Hampton and Maria McDonald, the famed Black supermodel, is his aunt. “They are in the DNA,” he says proudly. The rich upbringing engrained Anu with a sense of community that he puts into practice.

Anu, like his mentors, continues to give back selflessly to the music community in New York City as the founder of The Shed Open Jam. The event - a seven-year-and-running series - is a top jam session in New York City. The Shed has garnered a reputation as the hang-out for the hottest musicians and launch pad for emerging talent. Some even venture to say it’s the underground “Showtime At The Apollo. “I started The Shed to find the best up-and-coming talent to feature in my band and recording projects,” he admitted, “But, I also used it as a platform to find talents I wanted to hear beyond the radio. Shed supporters call it music church, hahaha.”